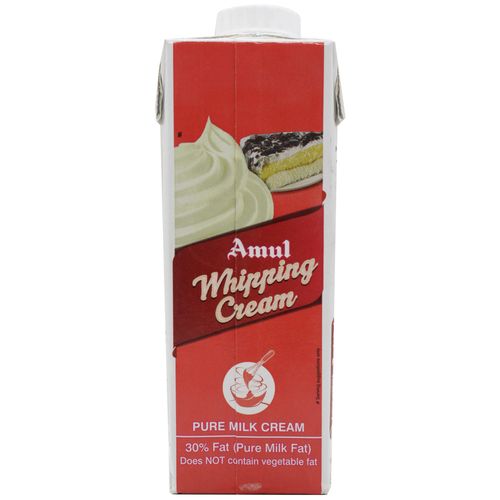 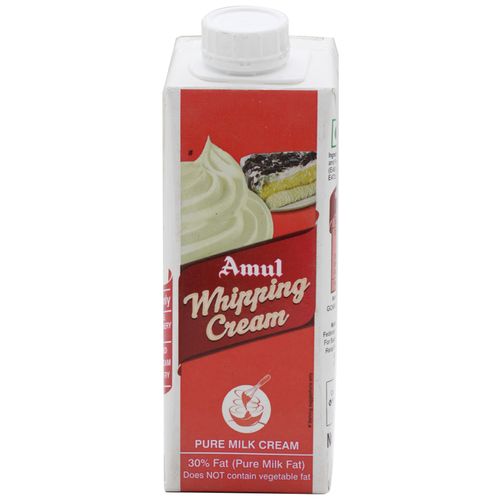 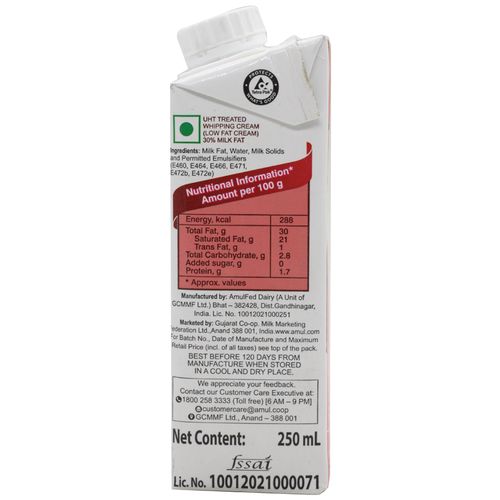 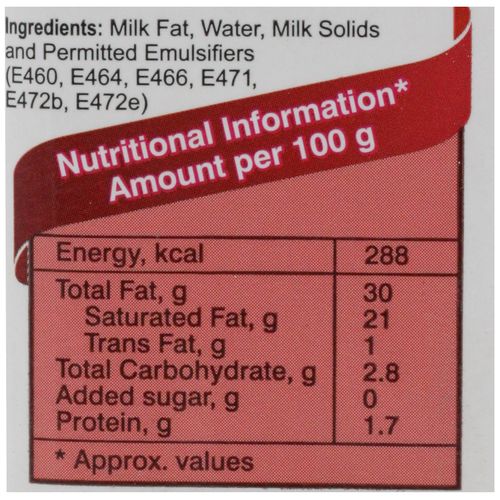 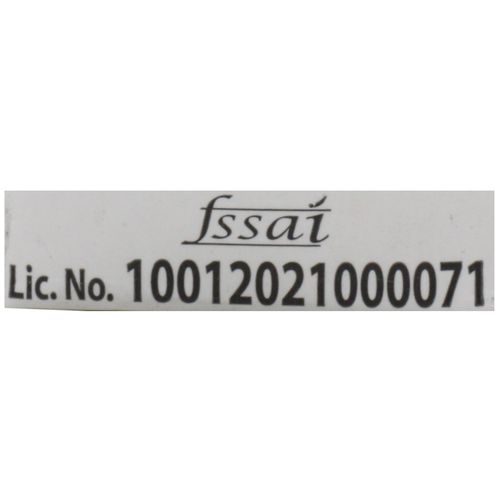 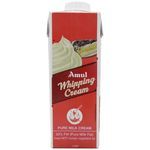 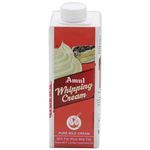 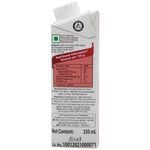 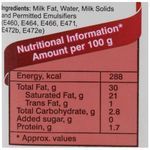 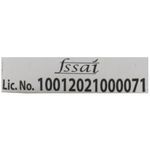 Dish up the most amazing sweet treats with this whipping cream from Amul. Whether you're a newbie baker or a professional one, you will love this whipping cream for your favourite recipes. This dairy-based whipping cream is creamier and has a richer taste compared to traditional vegetable fat-based creams. It's the first made in India packaged whipping cream from none other than the most loved and trusted dairy brand Amul. You can use this whipping cream in your recipes or add it as a topping on your favourite desserts, milk shakes and cold coffee. It's the tastiest addition to your fruit salad. When you use it, make sure to whip it well so it doubles and triples in volume to achieve the form and texture you desire for your recipes. If you have a birthday celebration coming up, stock up on lots of Amul Whipping Cream because it's a must in almost every other baked treats recipe! Right from topping to decoration and layering of cakes. Amul Whipping Cream is available in 1 litre and 250 ml packs. It is made of 30 per-cent pure fat milk. This is a vegetarian product and has no added preservatives.

Whipped cream is a dairy product which is made out of fresh cream which is whipped or whisked using a whisk or blender until it is fluffy and light. Whipped cream is more often sweetened using vanilla essence for added flavour. It is also called as Chantilly cream or crème Chantilly in some places. Some of the other flavours of whipping cream are sugar, chocolate, coffee and orange which are most popular in the baking and confectionary industry. Sometimes, egg whites are also whisked along with whipping cream to make it fluffier, but it can be avoided if you want a completely vegetarian whipped cream. Some other substances which include diphosphate and gelatin are also used as stabilizers while producing whipped cream. Whipped cream is a versatile topping as it can be made in various ways to suit every individual tastes and beliefs. Some of the recipes exclude dairy products used in whipped cream owing to milk allergies, lactose intolerance and to suit vegan diets where as some exclude eggs owing to religious reasons. Some recipes are created to provide a longer shelf life and some to reduce the cost of manufacture. You can buy whipping cream online at Bigbasket and choose from a variety of brands. Usually, whipped cream is a mixture of many ingredients such as partially hydrogenated oil, water, sweeteners, emulsifiers and stabilizers which are added during the whisking process to prevent chemicals synergies which are similar to margarine in place of butter fat which is found in the cream used in whipping creams. One of the most popular brand which manufactures whipping cream in India is Amul. Amul has always been the pioneer and one of the most trusted brands providing various kinds of dairy products in India for many years. Along with many dairy products such as milk, butter, cheese, paneer, ghee, chocolates, lassi, Choco and nut spreads, dessert mixes, ice creams and yogurt, Amul also provides whipping cream which is made out pure milk cream. Amul whipping cream 250ml price on Bigbasket is Rs.63 only and it comes packaged in a lovely red and white carton which is easy to store for a few days after opening. Amul whipping cream consists of 30% of milk fat whereas Amul fresh cream consists of only 25% milk fat and it is also low fat. Amul cream price on Bigbasket is Rs.57. You can buy Amul whipping cream online at Bigbasket easily with just a few clicks along with other baking and dairy products from Amul.
SHOP BY CATEGORY
login
Sign up

Get Social With Us